Celebrating our 51st year of sailing to Provincetown

In all of the 180 years of there being a ferry running between Boston and Provincetown, NO steamship company, before us, has been fortunate enough to have provided service longer than 26 years. Economic twists and turns and over-competition made service between Boston and Provincetown a revolving door of steamship operators since 1842. We are extraordinarily grateful to have found a way to make it to our 51st year of providing service to the great community of Provincetown.

Thank you for helping make it possible to get to this milestone. We've assembled this special section of our website to help commemorate our 50th year, last year. Sailing between Boston and Provincetown is a great American tradition. In sailing with us, you are participating in a storied New England summer activity even older than that of baseball. We look forward to the chance of including you in the great pastime. 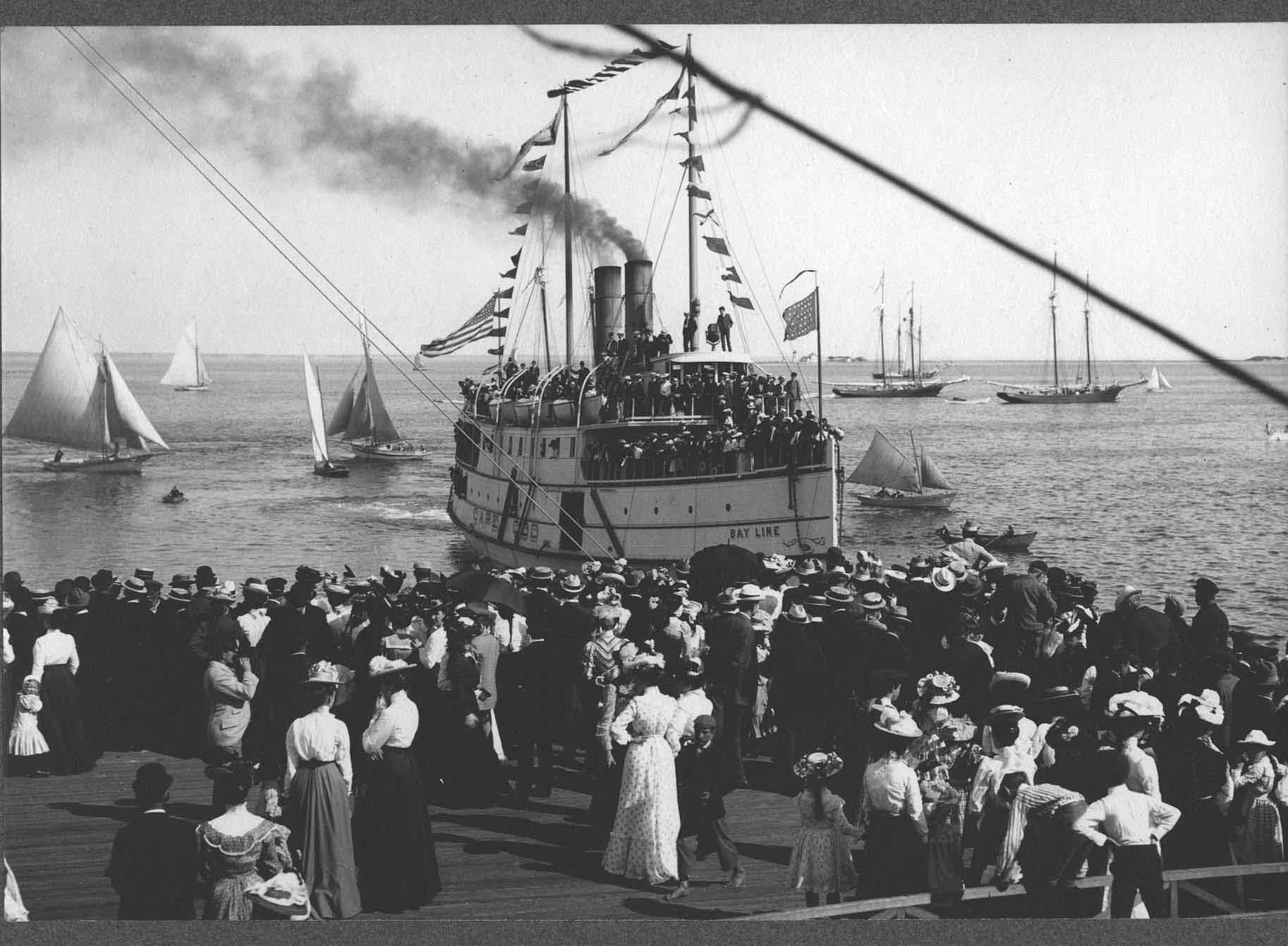 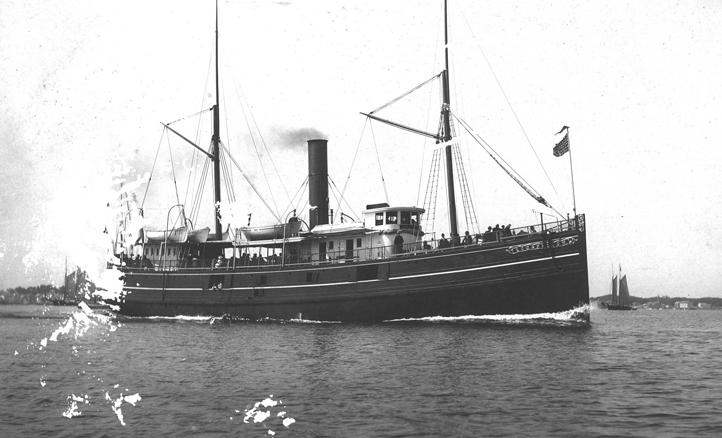 In 1883, the first vessel built specifically for the Boston-Provincetown route was introduced. The LONGFELLOW, pictured here in 1890, operated until 1902. In the background is Provincetown and two of the hundreds of fishing schooners that called on Provincetown regularly during its heyday as a fishing port. 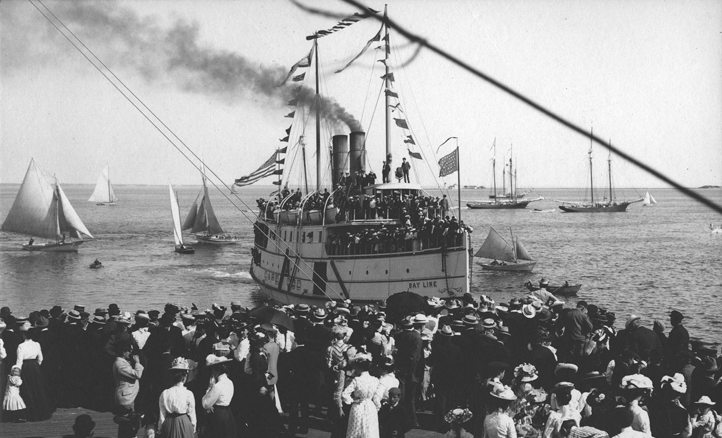 Photo circa 1902. Bay Line's steamer CAPE COD conducted service from Boston to Provincetown between 1902 and 1911. This photo shows the "Boston Boat" (as the ferry has long been named by Provincetowners) landing at Railroad Wharf. Later reconstructed and renamed MacMIllan Pier, the Boston Boats have been landing at nearly the identical location for 170 years. 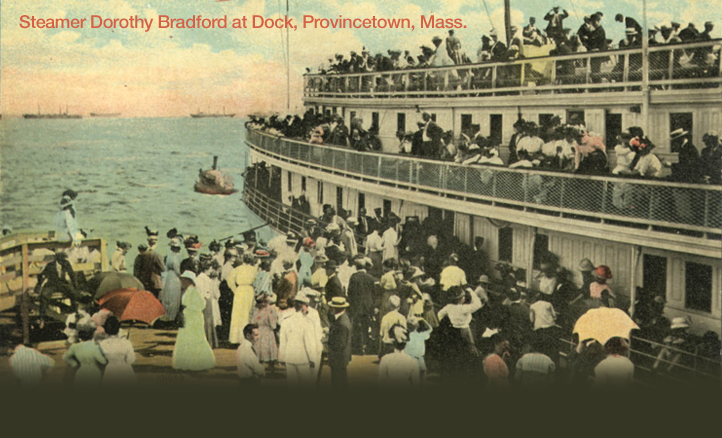 The DOROTHY BRADFORD was operated by the Cape Cod Steamship Company from 1911 to 1937. After Bay State Cruises, the Cape Cod SSCo was the longest operating steamship company between Boston and Provincetown. This picture, and the one immediately following, are fascinating for how they show the dramatic change in fashion that took place in the 26 years separating the photos. This, the first image, taken in 1911, shows ladies with hats, parasols, and long dresses. Men are uniformly attired in boaters and coats. By the time the following photograph was taken, in 1937, women are wearing sleeveless dresses, men are in shirt sleeves, completely gone are the parasols and half the group is without hats. 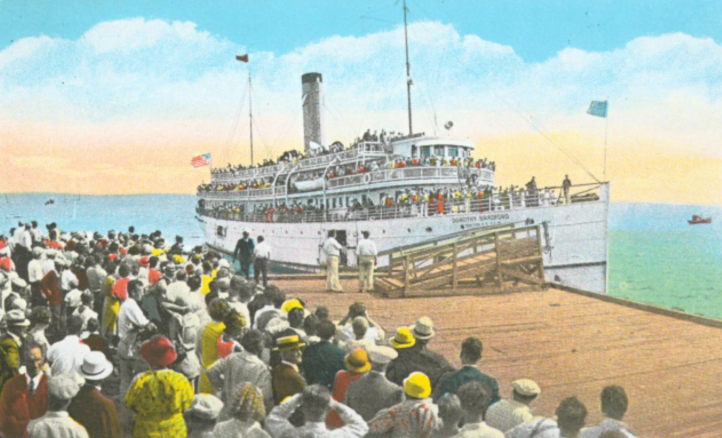 Seen together with the previous photo, this picture is fascinating for how it shows the dramatic change in fashion that took place in the 26 years separating the photos. The previous image, taken in 1911, shows ladies with hats, parasols, and long dresses. Men are uniformly attired in boaters and coats. By 1937, the date of this photo, above, women are wearing sleeveless dresses, men are in shirt sleeves, completely gone are the parasols and half the group is without hats. 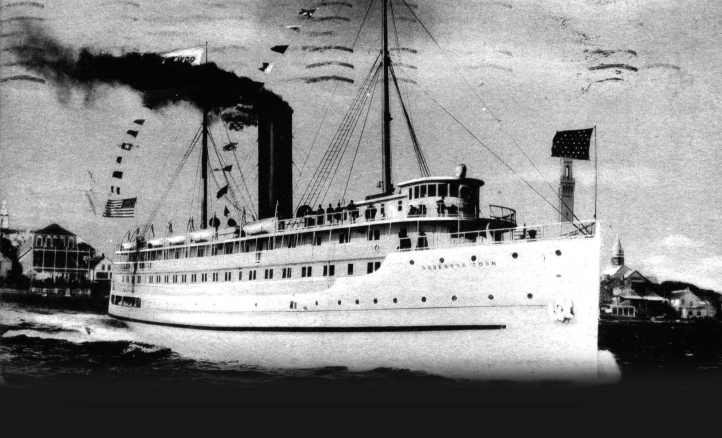 From 1937 to roughly 1945, Bay State Steamship Company operated the SS GOVERNOR COBB between Boston and Provincetown. This is the vessel that our very own Provincetown Ticket Office Manager, Erin Thomas Lawrence, tells us that her grandmother and grandfather met and fell in love aboard. The two met and danced together the entire trip-long. These vessels were, in large part, floating dance halls. 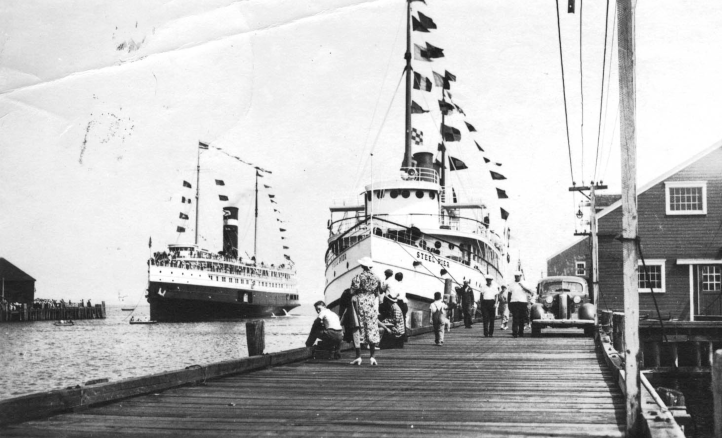 Photo circa 1945 - Here we see the veteran GOVERNOR COBB paralleled to the newcomer to the Boston-Provincetown run, the SS STEEL PIER. The STEEL PIER was the last steamer to have sailed the storied route. When the STEEL PIER went the way of history, so did sweeping sheer lines and fantail sterns of all the great steamers. 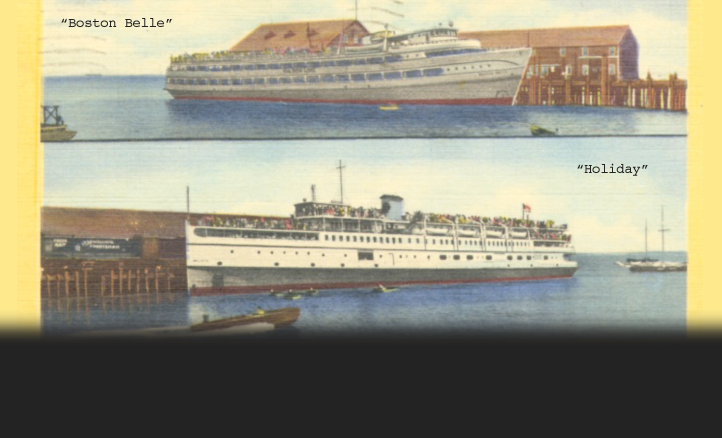 This postcard, post marked 1952, shows the dramatic change that took place in vessel design as steamer made way for new diesel powered motor vessels. Gone are the grand funnels and graceful lines. With an eye toward economy of construction, ships began being built with less and less compound curvature. The companies pictured above were also the last to call on Provincetown prior to bludgeoning one another into insolvency and ending ferry service from Boston altogether in 1965. This lapse in service remained in effect until Bay State Cruise Company started its service in 1973. 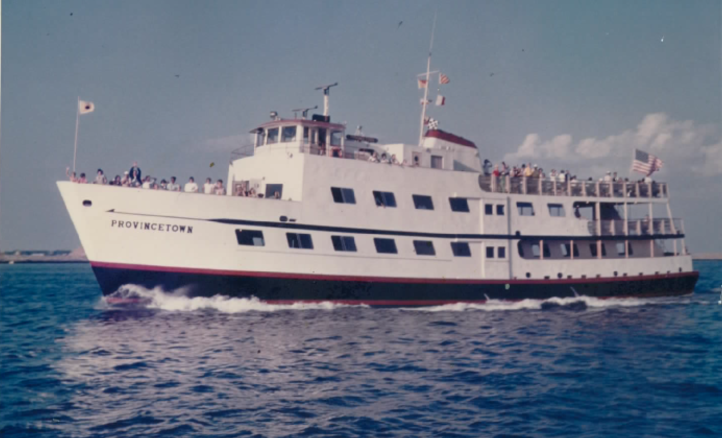 In 1973, Bay State Cruise Company steps in to put an end to the only eight year period, in over 100, that there had been no ferry service of any kind between Boston and Provincetown. The first Bay State Cruises vessel with the name PROVINCETOWN ran from 1973 to 1980. 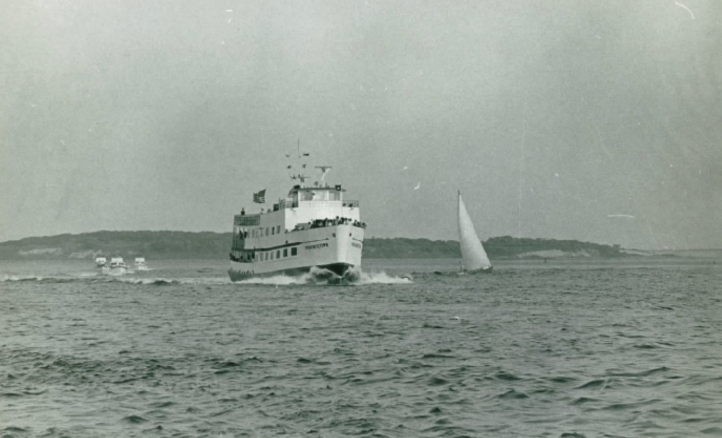 An image from the early 70s of the PROVINCETOWN leading a procession of recreational boaters who, prior to the advent of modern navigational electronics, leaned heavily on simply following the Bay State Cruises ferry from Boston to Provincetown in order to safely get where they were headed. 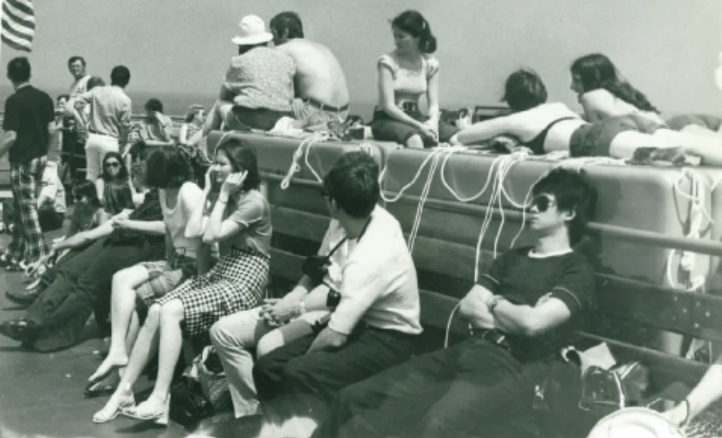 The MV PROVINCETOWN headed down to Ptown in the 70s replete with plaid bell bottoms and gingham skirts. 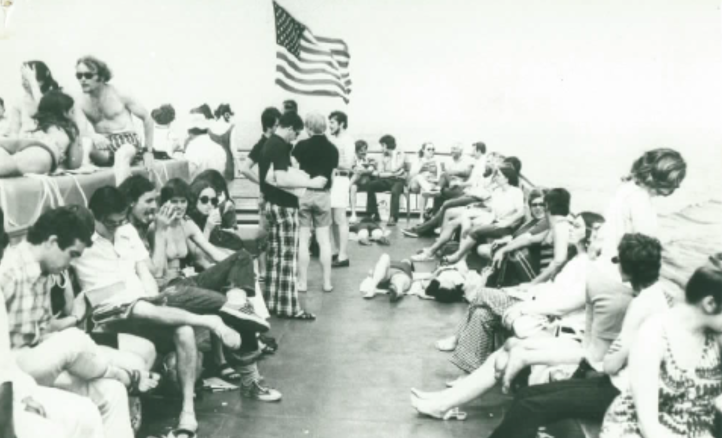 ...our early days of sailing to Ptown saw longer hair, wider pant bottoms, and even wider newspapers, back before the newspaper industry shrunk the dailies in order to save money. This picture also shows the start of what our crew later began calling our top decks on the PROVINCETOWN and PROVINCETOWN II: Steel Beach 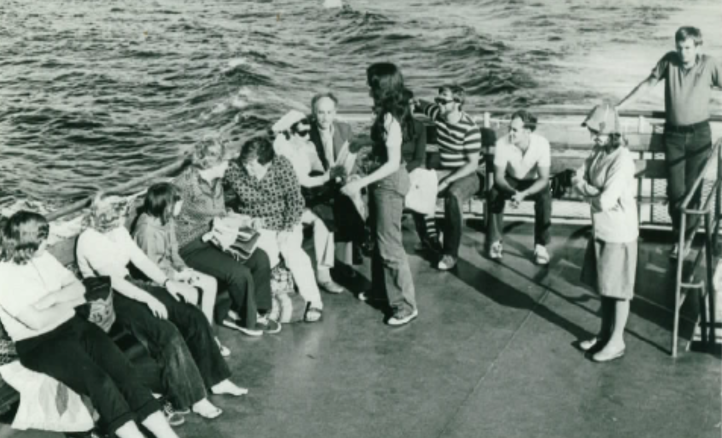 Our ferry PROVINCETOWN carried its share of Rayon shirts into Ptown in the 70s as well... 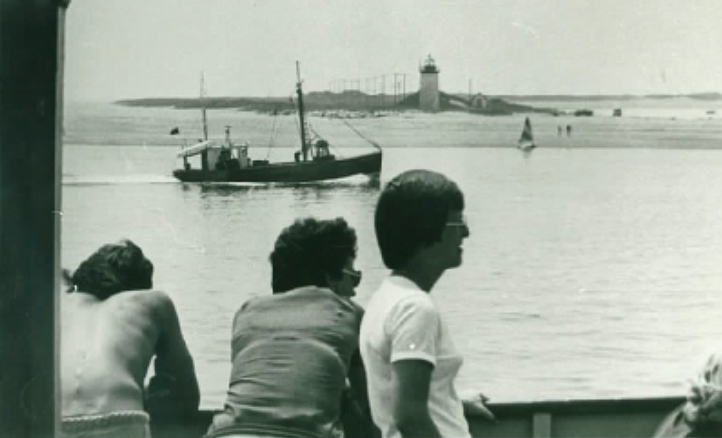 This photo is taken from the breezeway just aft of the staterooms on our first ferry, M/V PROVINCETOWN. It's a marvelous depiction of Ptown in the 70s, not just for the hairstyles of our passengers, but, for the fishing activity and shoreline of Provincetown. The inbound fishing vessel is none other than the F/V Michael Anne, one of the last Eastern Rig Draggers to call on Provincetown. Long Point Lighthouse is seen with the no longer existent overhead power lines. The sailboat on the shoreline is the venerable AMF Sunfish, the everyman boat of the 70s before Lasers and kayaks became all the rage. 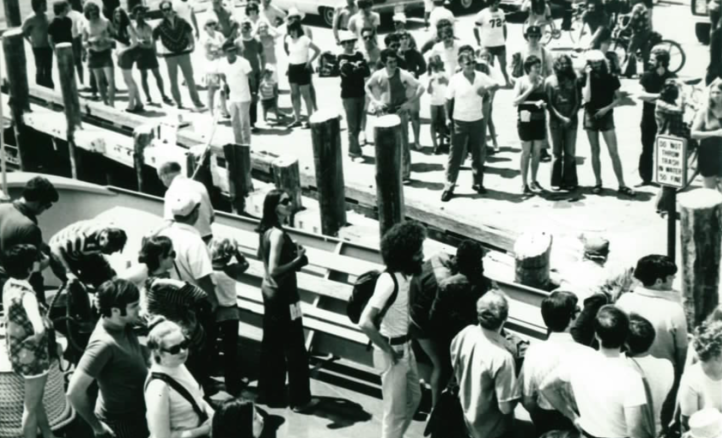 Upon docking in Ptown in 1973, the PROVINCETOWN ties up and prepares to disembark its passengers. LOVE the bell bottoms and LOVE the hair styles. Apart from the dramatic differences in fashion, this photo depicts a nearly identical scene as the ones from earlier in this album, from the 1920s and 30s. The 600' coil of line on the bow tells us that this photo was more than likely taken on the first trip of the season and the crew will be measuring and splicing lines all day long in order to have everything sized up just right for the remainder of the season. 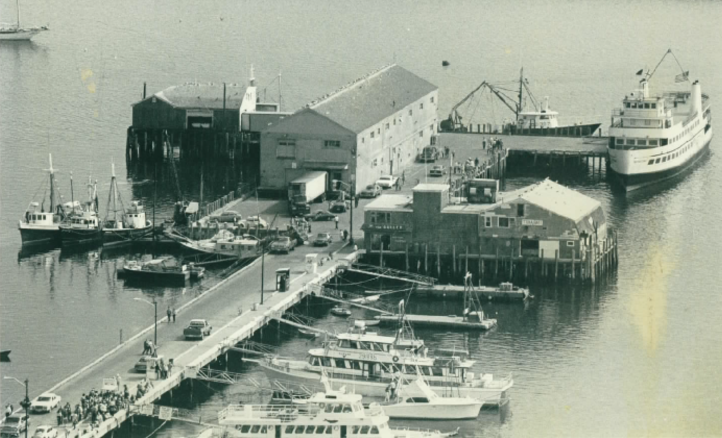 A photo from 1980, the first year we operated the MV PROVINCETOWN II between Boston and Ptown. MacMillan Pier still had the fish processing structures at the end and the Wydah Museum was still a coffee shop and bait shop. Traffic in the form of Ford Pintos, El Caminos, and the good old VW beetle further date the picture. 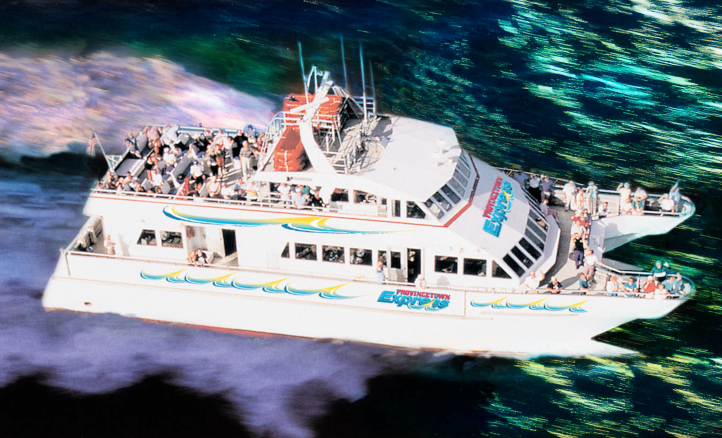 Bay State Cruise's third ferry dedicated to Provincetown, was the very first fast ferry to ply the route. We introduced the PROVINCETOWN EXPRESS in 1999. We ran only two trips per day back then and the price was $75 round trip. Despite a gallon of diesel only costing $.80 per gallon back then, we lost our shirts in these early years of fast ferry transport. 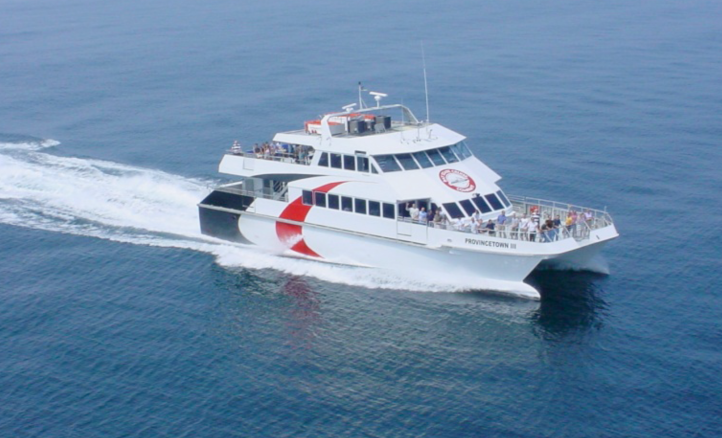 The fourth ferry that we dedicated to the storied Boston to Provincetown run is the still current fast ferry PROVINCETOWN III. We launched this wonderfully quick and comfortable boat in 2004. We are so proud to be continuing this 170 year tradition of ferrying passengers between Boston and Provincetown and are honored to be the longest operating ferry company of all those that have come before us. 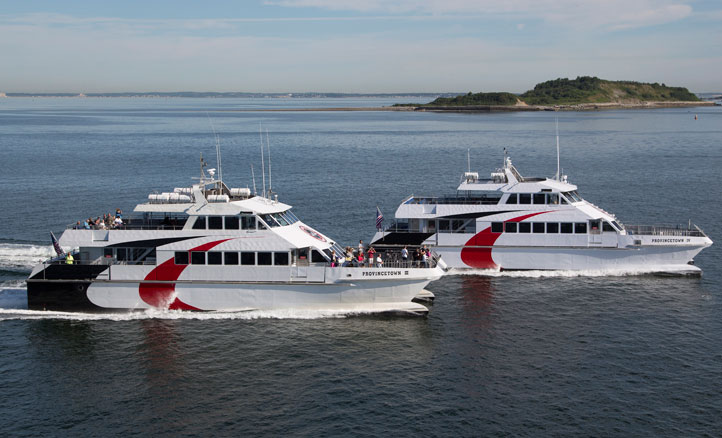 Further underscoring our commitment to this historic ferry route, Bay State launches the even faster/stronger/better PROVINCETOWN IV in July 2013. With the most sophisticated engines and ride control available, the PIV is the greenest ferry on Massachusetts Bay, and among the most comfortable.